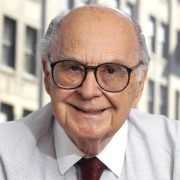 The ICCO community is saddened to learn of the death of public relations pioneer Harold Burson.

Burson is widely recognised as one of the founding fathers of the PR industry, having begun his career in the 1940s and launched Burson-Marsteller in 1952. He was the first ever inductee into the ICCO Hall of Fame in 2003.

“Harold Burson was truly one of the fathers of the global PR industry. His passing is a very sad moment indeed, but also a moment to reflect on his contribution to the industry that he did so much to create. The dynamic, creative, innovative PR industry we see today owes so much to his work. All of us in PR owe Harold Burson a huge debt.”