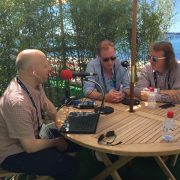 There are a number of ways to ‘do’ Cannes Lions – attending presentations in the Festival Hall, networking on the beach drinking plenty of rosé, having meetings in the posh hotels, or if you’re really lucky, partying on the private yachts listening to Take That play an exclusive gig (sadly that wasn’t me!).

My experience was slightly different, as I spent most of my time in ICCOs Cabana, aptly named the House of PR, where I was recording interviews for my csuitepodcast series.  However, what this allowed me to do was get an incredible perspective of what was happening across a whole range of aspects of the event, as in the three shows I recorded, I interviewed 17 guests that included Award Judges and Winners, CEOs, Creative experts, Data experts and even a spoken word artist who is now working with brands as a Social Influencer (and yes, I had to look up what a spoken word artist was too before I met him).

What this meant however, was that through my podcasts, I gained a wealth of insight as to what different people look to take away from Cannes, plus I got to chat in depth about some truly creative campaigns that you can only have the utmost respect for the individuals who come up with them – I mean seriously, someone, somewhere in a brainstorm, said, “I’ve got a cracking idea.  Why don’t we send kids who have broken their arms a transfer of their x-ray for them to stick on their cast, which can have a bar code, so that whilst their arm is healing, they can go into a supermarket, scan the bar code, and get free calcium rich milk” – by the way, someone must have said that at some point because that was a Gold winning campaign in the Health Lions for Anchor Milk in New Zealand by Fonterra and Colenso BBDO.

There is, without doubt some amazing creativity on show throughout the week and you cannot be anything but be inspired by it all.  There was, however, one stand out theme that seemed to run through a lot of what I saw, and that was Virtual Reality, an example of which was a winning campaign by DDB Remedy for Excedrin®, an OTC migraine treatment in the US, which helped to address the issue that people often respond to someone with a migraine by just saying that it’s nothing more than a headache and not serious!   DDB built a simulated VR experience and mobile app using insight from migraine sufferers so that they could personalise their migraine and share it with friends and family to gain their empathy.

Given I was sitting doing my interviews in the House of PR, it was no surprise that, whilst I was being wowed by all this creativity, a lot of the talk around me in the Cabana was why weren’t the PR agencies leading this work, submitting more entries for the awards, and even winning in their own category – only five of 84 PR Lions were awarded to PR agencies.

It’s clearly an area that needs to be addressed and talking to the likes of Richard Millar, CEO for H+K Strategies UK and Regional President for Europe, he is doing something about it in the talent he is recruiting.  Richard even said that he couldn’t remember the last time he interviewed someone with a typical PR background and that H+K are now hiring data scientists and more craft-led creatives, although essentially, he sees his agency as a canvass for a multitude of different skills and passions that they can bring to the benefit of the client who needs to engage with the public.

One observation I did make though, when I finally got out of the House of PR and had a wander around, was that as grateful as I was for all the free food and drink I consumed at the Facebook and YouTube beaches, where was Weibo and WeChat? It’s something I pay far more attentional to now I work for translation agency, Conversis, as a lot of our time is spent looking into cultural understanding, something that’s essential when localising content for international marketing, and it’s an area that has fascinated me since working for the company.  A lot of our agency clients would have been at Cannes, and so that was the other reason I was there – it wasn’t all about chatting to industry experts whilst sipping wine overlooking the beach!  However, for an International Festival of Creativity that spent a lot of time talking about social influence, it felt like a huge chunk of the online population wasn’t represented – (Free) Food (from Facebook and YouTube) for Thought perhaps for next year?

Listen to the csuite podcasts:

A postcard from Cannes, written by Francis Ingham

Communicating at the speed of culture
Scroll to top