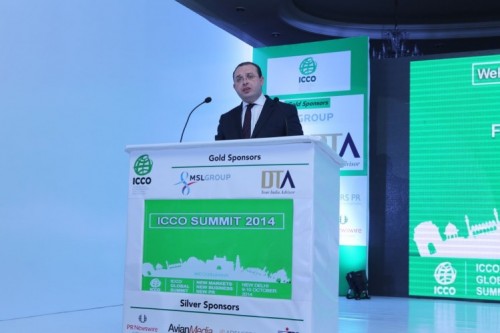 Last week, ICCO hosted its annual Global Summit in New Delhi. ICCO is the voice of PR agencies around the world, with 30 Associations representing nearly 2,000 agencies. And since January of last year, the PRCA has had the pleasure of running ICCO’s secretariat, with Ketchum’s Senior Partner, David Gallagher FPRCA, now ICCO’s President.

Opening the Summit, I was able to give attendees an update on ICCO’s progress; and an insight into our plans for the year, grouped around six ICCO responsibilities.

2. Showcasing the best of international PR. Progress: representing PR at Cannes for the first time earlier this year, and running the Young PR Lions competition. Plans: we’re going to launch the ICCO Global PR Awards, drawing on the very best from every established PR market around the world.

4. Spreading knowledge. Progress: our World Report and Quarterly Barometers set the gold standard of market intelligence. Plans:we’re expanding both to include more detail from further sectors of the market, and with a growing international reach.

5. Professionalising practice. Progress: our ICCO/UK PRCA training is being taken up in more and more countries. Plans: we’re about to launch an online version of CMS, making it easier than ever to test agencies against rigorous, independent standards.

6. Facilitating international networking. Progress: well, it spoke for itself. 200 senior PR practitioners, meeting in Delhi, having come from over 30 countries. Plans: regional events, based around a new structure.

And as for the Summit itself? A stunning success organised by my inimitable colleague Anastasia Tole (nee Demidova). Photos and presentations here. Roll on Milano next year!

Ketchum Wins ICCO-sponsored International Consultancy of the Year Award in ...
Scroll to top