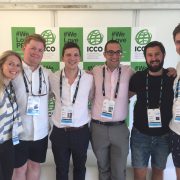 The team won the accolade at the annual Cannes Lions International Festival of Creativity 2016 which is currently taking place. The PR Young Lions competition saw 20 teams send their selected teams of two PRs under the age of 30 to Cannes. On Saturday 18th June, the teams were each given a brief by Nikhil Seth, Executive Director, United Nations, and on the following day had 12 hours to create a creative and effective campaign.

Francis Ingham MPRCA, Chief Executive, ICCO PR, said: “It is with great pleasure that we applaud Ben and Michael’s win and the placing of both Gambit Hill+Knowlton and Hotwire PR’s teams. Seeing the level of talent at this year’s festival has demonstrated to me that the future of our industry is in very good hands and all three teams should be incredibly proud.”

Blair Metcalfe, Client Director, MSLGROUP, said: “The efforts, the creativity, the inspiring ideas they came up with are a great exposition of the quality of our industry; it’s diversifying. I’m sure all of them will be back winning Lions at Cannes on the main stage in a few years to come.”

The Gold, Silver, and Bronze winners are:

PR In Africa: Changing The Narrative

A postcard from Cannes, written by Francis Ingham
Scroll to top