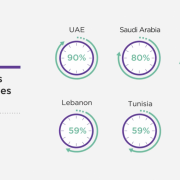 These are some of the findings from the fifth annual Media Use in the Middle East survey conducted by Northwestern University in Qatar (NU-Q). The studies, which were launched in 2013 to chart people’s media use and involve more than 7,000 subjects, are the most extensive surveys of their kind and among the few such regional longitudinal studies in the world.

The study covers media use and public opinion in seven key nations in the region: the United Arab Emirates, Lebanon, Saudi Arabia, Jordan, Qatar, Tunisia, and Egypt. (Egypt was surveyed in June and July 2017, five months after other countries, and is not included in regional average figures.) Data for the other six countries was collected prior to the diplomatic blockade of Qatar and thus predates recent PR and information wars in the region.

In a region grappling with issues of an evolving and often restricted media system, there may be signs for encouragement in the high levels of use — and, among more sophisticated users, trust — of news from social media.

Smartphone ownership in the countries surveyed is extremely high — 84 percent overall, with more than 9 in 10 nationals in Lebanon, Qatar, Saudi Arabia, and the UAE owning a smartphone. Over three-quarters of nationals get news on their phones, second only to news on TV. How news is consumed on social media The Middle East and the U.S. have similar rates of Facebook penetration and similar rates of users who get news on the platform. This is despite a general decline in Facebook use in the region, led by sharp declines in the Gulf. Since 2015, Facebook usership dropped in Saudi Arabia (76 to 55 percent), United Arab Emirates (83 to 70 percent), and Qatar (43 to 22 percent). Overall, 40 percent of those in the countries studied get news from Facebook. Use of video-first, closed-network Snapchat is divided between the high-connection-speed, privacy-concerned Gulf countries and the rest. In the Gulf, usership is more than 50 percent, while in non-Gulf countries it remains below 20 percent (in the U.S., it’s 18 percent). News use on the platform is similarly divided — far more Snapchat users in the Gulf use it to get news (55 percent in Qatar, 51 percent in United Arab Emirates, and 37 percent in Saudi Arabia).

Trust in news in general, and news on social media

Trust in mass media is high. Overall, Arab nationals are twice as likely as Americans to trust mass media. This level of trust is generally consistent across age groups and education levels. Might it be that the people who say they trust news from social media are not ignorant of or indifferent to quality information, but in fact are more sophisticated users of social media, with better-curated feeds containing more reliable sources? Social media and mass media are not mutually exclusive. Traditional journalism outlets rely heavily on social media referrals for their site traffic if they even still bother to try driving traffic to their websites at all.

All respondents are still more likely to say they trust mass media than social media. It’s just that news from social media is more likely to be trusted by younger, better-educated people — which is to say more native, sophisticated users of the medium.

The report is conducted each year with multiple purposes in mind — as an impartial assessment of media use aimed at academics, industry professionals, and others. The data are also contributed to the World Internet Project, conducted by the USC Annenberg School, of which NU-Q is a member.

In a region where censorship and free speech can be controversial, the study is used as a template for discussion and debate that might not otherwise be encouraged.

You can read the full report here.

Findings reflect nationally representative samples of over 1,000 respondents in each country. Interviews were conducted face-to-face in most countries, and by phone in Qatar. The study was led by Northwestern University in Qatar Dean and CEO Everette E. Dennis and researchers Justin Martin and Robb Wood. Field work was done by the Harris Poll.

Twinpine Networks: “Nigeria remains the most mobilized country in the...

Is your business marketing to millennials properly?
Scroll to top