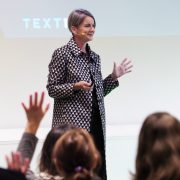 Technology’s greatest potential is in its ability to empower humanity, Text 100 chief executive Aedhmar Hynes told the ICCO Summit in Helsinki this morning.

HELSINKI— Technology’s greatest potential is in its ability to empower humanity, Text 100 chief executive Aedhmar Hynes told the ICCO Summit in Helsinki this morning, challenging the assembled PR executives “as storytellers… to see what the story is in all this innovation, how it will bring communities together, make healthcare better, enable us to live longer, better lives.”

Acknowledging that many professional communicators—and even some technology experts—are concerned about the future that new technology developments like artificial intelligence might bring, she conceded that “from a consumer perspective, there are fears that our hubris and over-confidence can come back against us, that we are in danger of creating something we can’t come back from.

“But that dark side is more about people and people’s use of technology, than it is about the technology itself.”

Hynes made the point that the dystopian view of technology and the future is nothing new. She moved from the UK to Silicon Valley in the late 90s and worked with Bill Joy of Sun Microystems, who was featured in a much-discussed “Why the Future Doesn’t Need Us” cover story in Wired magazine. “Yet today we are using technology to live, to work, to play in ways we could not even have imagined,” she said.

Today, Elon Musk and Stephen Hawking are among those warning of the dangers, but Hynes said, “The danger is the gap between humans and technology, and we as storytellers have to close that gap.”

She has worked with IBM on initiatives like Smarter Planet, which set out to “elevate and humanize” the company’s brand by connecting it to things that really matter to consumers—most of whom will never buy an IBM product of service. Today, the company’s work around Watson focuses on the life-saving capabilities of the company’s technology solutions. Telling stories like that have been critical to helping people understand the value of disruptive technologies.

But the challenge is not limited to technology companies. “Regardless of whether you in the tech industry or another industry as a communicator. Whether you in the consumer realm or the political realm, technology is going to impact how you communicate in the future and you have to start to think about that now.”

To help tell those stories, she said, the PR industry needs to be more diverse.

“Diversity to mee is not just gender and ethnicity. It’s about thinking, and diversity in the way people are trained from data scientists to anthropologists. Bring as much diverse thinking into your organization as you can, people who will challenge your thinking.”

She also warned that “we can’t leave this to young generation. Make sure this is part of your comfort zone, and think about the positive changes that technology is going to bring.”

To that end, she urged the audience: “Remain curious. Stop the people who are using technology in new and interesting ways and ask them to explain, to tell you how it can change your work, your life.

In conclusion: “We have to be talking about technology in a positive way, in a way that is going to create a future that we can all be excited by.”

ICCO Summit Debates Purpose: How To Avoid The Backlash
Scroll to top