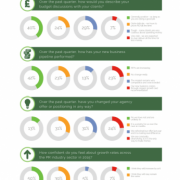 “The outlook for the global PR community remains highly positive, with growth expected and budget discussions positive. In large part, this reflects the resilience and flexibility of consultancies –their ability to change their models, to diversify their offerings, and to grow into new markets is their trademark, and is providing the engine of their growth”

Binta Kristin Hammerich, ICCO General Manager said: “ICCO is delighted to announce it is now working with Question & Retain (Q&R) to provide more industry insight for all of its members. Please look out for our next Pulse Check™ on overall membership satisfaction which will be coming out in late March 2015.”

The International Communications Consultancy Organisation (ICCO) is the voice of public relations consultancies around the world. The ICCO membership comprises national trade associations in 30 countries across the globe in Europe, Africa, Asia, the Americas and Australia. Collectively, these associations represent over 1,900 PR firms.