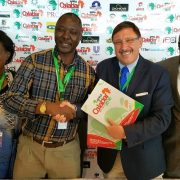 International Communications Consultancy Organisation (ICCO) and the African Public Relations Association (APRA) have signed a memorandum of understanding to work much closer together for future common projects. This took place on the back of APRA’s 28th Annual General Meeting held in Calabar, Cross River State, Nigeria.
Maxim Behar, ICCO President and Peter Mutie, President of APRA signed the agreement in the presence of APRA Vice President Christina Chima and former Secretary General and new APRA President Yomi Badejo-Okusanya, as well as representatives of more than 25 countries from Africa and beyond that attended.
According to the memorandum,  APRA will promote and represent ICCO activities in Africa, and ICCO will deliver to all APRA members its newly launched newsletter, published together with global leader in industry news PRWeek. The two associations will also exchange constant information about their members and activities, and also their Boards will have regular meetings.
Maxim Behar, ICCO President says:
“We are all very happy to have APRA as our partner. Africa is a very fast growing market, PR business seems to be booming in some countries and ICCO is ready to partner with them. We also welcome our African friends to the next ICCO Summit in Oxford, UK at the end of September 2016, and also will also extend to them the opportunity to enter as many applications as possible for the ICCO Global PR Awards held two months later in London.”
Peter Mutie, APRA President says:
“APRA is extremely delighted about the partnership with ICCO. We believe both organisations have so much to gain from one another as demonstrated during this conference. In particular, we believe that the partnership will help grow the number and quality of PR consultants on the African continent”.
https://iccopr.com/wp-content/uploads/2016/06/maxim-1.jpg 473 800 blaze https://iccopr.com/wp-content/uploads/2017/03/2834-ICCO-Logo-Horizontal-CMYK-1030x458.png blaze2016-06-01 10:04:282016-06-01 10:04:28ICCO and APRA announce partnership to grow global PR industry

Serbian Public Relations Association awards the best in the field

PRCA UK Census 2016 reveals that the PR industry is worth £12.9bn
Scroll to top