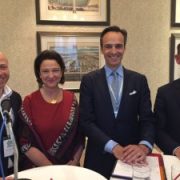 I was joined by Fredrik Lofthagen, Chief Executive Officer of Interel; Caroline Wunnerlich, Managing Director for the Brussels office of FleishmanHillard and Tangui van der Elst, Director of European Government Affairs at WestRock. We covered a number of topic areas including, but not limited to:

We began the conversation looking at the results of some research that Interel had carried with CEOs of independent public affairs consultancies in 60 markets.  Fredrik explained that one of the key findings was that despite CEOs concerns about political risk, spending on Public Affairs is still only a fraction of what businesses spend on marketing – around 0.003% of the total revenue of the Fortune 500.

Fredrik felt this was a mismatch that needs to be rectified but he said that very few companies are actually able to determine or quantify the impact of over regulation or geopolitical risk to their business, which in turn makes their spending decisions and resource allocations more difficult to do, which may have hampered the development of the Public Affairs profession.

Caroline added that many companies still have fragmented functions in that Public Affairs and Government Relations is still quite separate from their Communications.  There are therefore often only responding to crises after they have happened or are having problems getting budgets opened. However, she believes there are shifts occurring and that some companies are realising that their consumers/customers are of course people who have views, who vote and have opinions on public issues and so those companies that are realising this are beginning to understand that you can do well by doing good.  She quoted Unilever as an example of such a company – not the first time Unilever has been praised as such on this podcast series, so they are clearly doing something right – see Shows 31, 22 and 8.

Caroline talked about how FleishmanHillard has developed Shared Value Labs that are being run out of Washington DC, to look at how companies can get involved with Governments to create unusual alliances to tackle societal and environmental problems.  Interestingly, given we recorded this before the US Election result, she said that if Donald Trump won, there would be a bit of a retreat from Government from a lot of the activities and multilateral institutions such as the UN, leaving a requirement for corporations to fill quite a vacuum.  Let’s see if Caroline was right!

How Trump’s victory affects the UK relationship will also be interesting as Caroline explained that the transatlantic relationship is already very strained from a business perspective due to issues such as [Volkswagen] ‘dieselgate’, which started in the US, European banks being fined, data protection issues, and corporate taxation tussles with a lot of US companies, all of which causes an underlying tension.  These issues, together with the failure to progress any meaningful trade talks under the TTIP initiative, means that the whole relationship between the UK and US will need some recalibration.

However, overall the elections have, in Caroline’s opinion, thrown up some big questions about how to advise clients and engage in political discourse where people who can lie and be abusive can still get elected, referring to an Economist article on the ‘Art of a the lie, post-truth politics’ in the age of social media.

In terms of what impact the Brexit vote might have to the future of Public Affairs, Tangui said he has struggled to find any reasons to be optimistic. He uses the fact that he is based in Switzerland to share some insight in that two years ago, the country had its own referendum on controlling migration, which received the majority.  However, the decision faced strong opposition within the EU that said that if Switzerland was to implement the referendum, then all the existing bilateral agreements between the EU and Switzerland would be void due to free-movement being so essential to the EU’s very existence.  Tangui explained that the Swiss thought they could find some form of compromise, trying for two years to achieve one, but finally realised that the EU would not move from their stance.  He said that Switzerland has therefore quietly shifted the referendum so that they can maintain their bilateral agreements as access to the EU was considered too critical to the Swiss economy.

Tangui feels that in the UK, there is too much emotional equity in the referendum result for it to go back, which is why he feels that we will all be losers, both in the UK and Europe.

Whilst Fredrik shares those concerns of Tangui, which Caroline also had, he said that the EU has an extraordinary ability to muddle through from one crisis to the next and that there is usually some form of outcome that most stakeholders would agree with.

With respect to business though, Fredrik’s advice is not to wait for the outcome and not to try and spend too much time scenario planning around it because it’s just speculation at this current time.  However, in his opinion, what is important is that through the Brexit vote, the UK is already losing its voice in Brussels today due to senior commission officials retiring and MEPs losing chairmanship opportunities or being the rapporteur on a particular dossier in the European Parliament.  His concern is therefore about who will replace the UK and the voice of the UK, in particular in the Council of Ministers at working group level, specifically in respect of corporate issues.  Therefore, Fredrik does recommend companies thinking about what their engagement strategy will be moving forward as every company will have their own portfolio of issues and dependencies and if they are dependent on the UK to defend them in the context of EU legislation or regulation, then they need to think about who their new friends are going to be and start making those approaches.

Tangui added that from what he can see working for a major US multinational, investment strategies are already affected as, in his view, no company would consider investing in the UK unless, and he used Nissan as an example, they can get strict guarantees.

Naturally there’s been a huge shift to engaging online and particularly through social media, but one of the big developments that Caroline shared was how Youtubers Laetitia, Jonas and Lukasz were asked to interview President Juncker of the European Commission after his state of the European Union speech

Caroline added that social media brings with it its own challenges, particularly in how messages go across borders, although she said that can be used to an advantage such as in some very effective NGO campaigns, but regulations are still developed nationally at a much slower pace.  Her company has been working around the issue of Glyphosate, a product used in the crop science industry, which, as far as regulators are concerned, is not unsafe.  However, the campaign and debate on social media has been so heated and active that the regulators have postponed decisions and instead of a license to operate for the next 15 years, the company has been given 18 months whilst further research is done.

#ad – Many thanks to global media intelligence provider CARMA for supporting the series of shows I produced from ICCO.  Please do visit their website to find out more about how they can help you deliver actionable insights through media monitoring and PR measurement.

All previous shows of the csuitepodcast series are available on Soundcloud, itunes and now TuneIn too.  If you subscribe to the show, please can you give it a positive rating and review on itunes in particular as this helps it up the charts!

My chat with Lord Chadlington