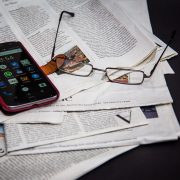 Article by The Canadian Press

A classroom program aimed at teaching Canadian elementary and high school students how to detect fake news in an
era in which almost anyone can publish information is under development, groups behind the initiative said Tuesday.

Called NewsWise, the idea is to enhance general news literacy among students aged nine to 19, an increasingly important skill set when so many readily accessible news accounts are unreliable or simply fabricated.

“Fake news accelerates distrust in our institutions, including distrust of the trained media who spend so much time trying to hold the powerful to account,” David Walmsley, editor of The Globe and Mail, said in a statement.

“This initiative provides an arena to engage a younger audience and to ensure they’re equipped with the skills to identify reliable sources of information.”

Canada has not been immune

Social media have become a key means for spreading news, with the difference between real, mistaken and deliberately fake information often hard to discern. Canada has not been immune to the false news phenomenon.

Two organizations, CIVIX and the Canadian Journalism Foundation, said they would work with academics and journalists to develop the curriculum for about 1.5 million Canadian students. CIVIX, a national charity focused on getting youth engaged in civics, stressed the importance of reliable news sources to a functional democracy.

“Giving young Canadians an understanding of the role journalism plays in our society and the know-how to find and filter information is essential in nurturing an informed citizenry for the long term,” said Taylor Gunn, the group’s president.

Social media such as Facebook and Twitter that allow easy and free access to news from a huge variety of sources have also contributed to the financial pressures facing traditional journalism outlets, who strive to present accurate information in an increasingly crowded news-scape.

‘Almost by definition a good thing’

Google Canada, part of the worldwide information behemoth that has come under fire from some mainstream news organizations for making their product widely available at no cost to consumers, is providing $500,000 to fund NewsWise.

“Making sure young people understand the importance and value of responsible journalism is, almost by definition, a good thing,” said Fraser whose organization deals with public complaints about newsmedia articles. “It is also adroit of Google to affirm its commitment to credible information and the social responsibility of tech giants in these uncertain times.”

The current plan is to roll out NewsWise ahead of the Ontario election, slated for early June, other pending provincial elections, and the federal election due in 2019.

In an online blog post, Gunn and the foundation’s Natalie Turvey said the explosion of social-media platforms has changed how news is consumed and shared — but knowledge about how reliable news is generated can be woefully lacking.

“We need to help Canadians better understand how quality journalism is produced and how to determine which sources of information are reliable,” Gunn and Turvey wrote. “News literacy  skills are essential to this process.”

Is your business marketing to millennials properly?

Bahrain to become home for ‘big data’
Scroll to top