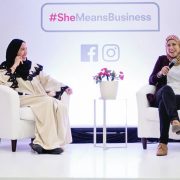 Article by Archana Menon for wamda

If you are a woman, have founded, cofounded, or own a business, and are interested in using Facebook and Instagram to grow it, then you have met the criteria to join Facebook’s #SheMeansBusiness initiative. It is a global training program for women entrepreneurs to optimize their use of the two social media platforms.

“That’s literally it!” said Rasha Kashkoush, head of communications at Facebook MENA, of the lenient criteria. It doesn’t matter whether the business is in its conception phase or has existed for decades. “We are not assessing the business, we are welcoming people,” she told Wamda. “We are not looking at the viability of the business…we are not a VC.”

#SheMeansBusiness launched in the Middle East and North Africa in February 2017, aiming to train at least 10,000 women via workshops and community building. The free workshops are available in the UAE and Egypt and have trained almost 700 women so far.

Declaring that they “can never do it alone,” Kashkoush said collaborating with local organizations was critical to diversifying their workshop audience. Partners in the initiative are Ahead of the Curve in Egypt, and Sheraa Sharjah and Emirates Foundation in the UAE.

The Facebook team (Facebook acquired Instagram in 2012) began by designing  a curriculum specific to the MENA initiative. Available in Arabic and English, the curriculum is flexible and can be tweaked to suit the level and needs of each workshop audience.

The team also trained its representatives in matters such as utilizing the latest platform updates as well as effective ways to cater to women entrepreneurs. The sessions started off as eight hours long, but were cut to four to six hours upon the audience’s feedback .

For Sheraa Sharjah, partnering with Facebook aligns with the center’s mandate, namely ‘creating the next wave of entrepreneurs’ in the region.

When women do better

“When we think of tech, it’s slightly male-dominated…there’s this discrepancy,” said Sali Elagab, Sheraa’s space coordinator and one of the workshop leaders. The workshops are “about empowering [women] to scale [their business] as much as possible and use the potential as much as possible.”

“The ethos of this program is that when women do better, economies do better,” said Kashkoush. A McKinsey report, quoted extensively on the initiative’s homepage, states that should women’s participation in MENA labor markets increase to the level of men’s, the regional GDP could rise by 47 percent  over the next decade, and MENA could realize $600 billion in economic impact annually ($2.7 trillion by 2025).

It doesn’t matter if your business
is in its conception phase to join the initiative.

Elagab and Nasser Al Sughair lead Sheraa’s #SheMeansBusiness workshops, whose attendees include home business owners, college students, mother-daughter duos, and marketing managers from a range of industries. While there might not be a pattern to the audience, there is one to the questions asked during each session.

“A lot of these women want to go out and scale the business through Facebook and Instagram,” Elagab explained. “But either they do not have the time [to do] backend research as an entrepreneur…or they do not know the nitty gritty of the process.”

According to the initiative, men can attend as long they represent a business owned or at least cofounded by a woman.

To further the initiative’s mission, Iman Ben Chaibah, founder of UAE-based Sail Publishing and one of the #SheMeansBusiness ambassadors, said men need to be included in the conversation.

“Like it or not, [men] are the ones who are the executives, the business [decision-makers],” she explained. “So we can talk as much as we want, but unless they are there [at] the table saying, ‘Yes, we hear you, we understand. We are going to give you our hand, extend it and actually pull you with us,’ it will not take us anywhere.”

Slightly diverging from Facebook’s requirement for men attending the workshops, Sheraa also extends the invitation to men who train women or work in the women’s development field. However, Elagab said if the men work for a female co-owned company but do not work towards women’s development, they are asked not to attend the sessions.
“We urge them to invite the female cofounder since the workshop is designed for women as advertised,” she said referring to Sheraa’s invitation for the session.

For Meredith Huston, founder and principal daydreamer at Turquoise Boutique Studio, which markets do-it-yourself (DIY) kits and promotes DIY culture in the region, the workshop changed how she fashioned her Facebook ads.

“When I launched specific DIY kits for baby showers or weddings, for example, I had no idea about the ability to target ‘life events’ like getting married or having a new baby on Facebook,“ Huston explained.  “Mostly, I was creating Instagram ads before the workshop, and managing ads from that app directly did not offer [a] detailed level of options.”

With one-off sessions, the initiative admittedly runs the risk of having a limited impact. To offer lasting value, Sheraa created a closed Facebook group whose page helps attendees keep in touch and also contact Facebook team members for any follow-up questions.

Nida Sumar, founder and CEO of KEZA, a mobile app for the dining industry, attended a workshop in May 2017. She believes that regularly holding separate workshops for the two social media platforms, Facebook and Instagram, with “more mid-level and advanced workshops on some of the more technical topics,” would improve the overall impact.

“Unless you come with a bit of background in tech, tech can be really intimidating,” said Ben Chaibah, whose own background is in computer science. “It’s not exactly a first language for so many people.” Digital marketing already helps women “break out of a bubble,” she pointed out, and reach different audiences. Now, with this initiative, they might also grow “confident enough to play with” the Facebook and Instagram platforms.

80% of leading Nordic retailers have app and optimized website

Chinese Networking: How to Talk the Talk in China
Scroll to top