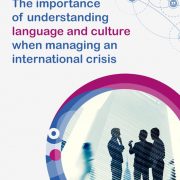 The UK and US markets lead PR. It’s a statement that I make dozens of times every year, and it’s completely right. In size, sophistication, and staff skills, it’s unquestionably true. And it’s a source of great strength and pride. But it comes with a price attached, and it brings risks. If you’re going to operate globally, and if you’re going to maximise your reach and effectiveness, then you need to be able to communicate globally too.

We simply do not invest enough time effort and – yes – money in communicating in other languages, and in understanding other cultures. The costs of that failure are never higher than when crisis hits. Both the commonalities and the differences strike me.

First, the things that are the same in the UK and the US: Basically all (99%) senior PR executives with responsibility for international crisis comms are confident that their work will take account of cultural sensitivities. And in both countries, when asked if they can respond in a timely manner and across all markets, between 40-50% of executives agree strongly.

On both sides of the Atlantic, there’s a need for support from Language Service Providers – 92% in the US, and a still very high 72% in the UK. But the differences are starker as you dig further into the data. Almost a third of UK respondents translate their campaigns into between 1 and 5 languages; the US figure is only 7%. Conversely, over half of US work is translated into 11-20 languages; compared with just a quarter in the UK.

Monitoring reveals significant differences too. Only 14% of UK companies monitor in 11 languages or more, compared with 47% that do so in the US. Surprisingly, the time taken to issue a first response holding statement shows the opposite trend. 37% of UK respondents are out there within an hour; only 17% of their US counterparts can say the same.

What is the conclusion that I draw from this incredibly valuable Conversis report? Basically, that there is a great deal more we need to do. The world’s two most developed PR markets need to embrace the world around them a little more. When crisis hits, they need to be out there responding with nuance and in local language right away. They can’t afford to be held back by lack of resource, lack of knowledge, lack of preparedness. If the UK and US markets are to continue to speak to the world, then they need to think more carefully about speaking its language: and that language quite simply isn’t always English.

A full copy of the Conversis Report can be downloaded here: http://www.conversis.com/News/April-2016/Conversis-launches-The-importance-of-understandi