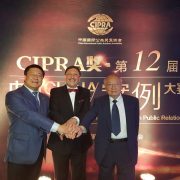 The China International Public Relations Association (CIPRA) and the International Communications Consultancy Organisation (ICCO) have decided to strengthen ties and to exchange information, visits and experience. This agreement has been reached during a visit by ICCO President Maxim Behar to Beijing where he met with senior representatives of CIPRA and the Chinese Ministry of Foreign Affairs.

As part of his speech at the Annual CIPRA Summit, Behar said: “ICCO has long history in its relations with Chinese colleagues and now we have the historical chance to develop them in a way where the organisations will establish much closer professional relations, and their members will benefit from this”.

“We officially invite our Chinese friends from CIPRA to send a big delegation to Global ICCO PR Summit in Oxford this September, and before that we hope to reach an agreement for CIPRA to join ICCO as a full member”, Behar added.

During his stay in Beijing Behar had official meetings with the President of CIPRA, Ambassador Li Daoyu, and also with the Secretary General Zhao Dali and Honorary President He Luli. In all meetings the parties underlined how important it is that the achievements of the Chinese public relations business be promoted on an international level, and that the exchange of experience will be the productive motivation for success in the current dynamic world.

Zhao Dali, CIPRA Secretary General said: “We highly appreciate the visit of ICCO President Maxim Behar to Beijing and his inspiring speech at the opening of our Summit. CIPRA management now feels that our positions are closer professionally, like never before, and we hope that in the future we may have effective projects together.”

The International Communications Consultancy Organisation (ICCO) is the voice of public relations consultancies around the world. The ICCO membership comprises national trade associations representing 48 countries across the globe in Europe, Africa, Asia, the Middle East, the Americas and Australia. Collectively, these associations represent some 2,500 PR firms.

The China International Public Relations Association (CIPRA), set up in April 1991 as a corporate body headquartered in Beijing, is a national organisation aimed at international cooperation in the field of public relations. Its mission is to strengthen the management of the PR industry, engage in PR study, practice and strategy-making for the industry in China; raise the social position of the PR industry and practitioners, and protect legitimate rights and interests of PR practitioners. The association also provides comprehensive services and training programmes for its members, and promotes the cooperation among PR organisations both at home and abroad.