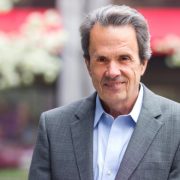 Over the past few years, it feels like ‘award’ has become a bit of a dirty word.

Whether it’s large organizations turning their backs on Cannes, the proliferation of new and niche shows which are hard to keep track of, or political protests overshadowing the red carpet, it seems celebrating the successes of our industry has become less and less, well, celebratory.

It feels like “awards” is all too often a word junior staff associate with directors who strut out of the office in tuxedos, and come in late the next day with a headache and a need for pizza.

It’s a word associated with egotistical creative teams seeking validation – recognition of their brilliant thinking, their lightning bolt of inspiration and their wittily crafted piece of content.

It’s synonymous with nervous account leads, wary of spending time and money on producing
assets, writing entries and working out whether it’s fair to ask the client to cover the entry fees.

It’s a word used all too often as a shortcut for big thinking, often by those not entirely sure what big thinking looks like, or what it needs to achieve.

This may seem like rather an odd introduction for an awards show but, in my opinion, something needs to change. And the clue is in the word “change”.

Now, many of us like to say we’re in the reputation business – building it, measuring it, shifting it – and we measure our success in many ways. We measure it in clippings, in AVEs, in likes, sign-ups and in sales. If none of this changes, we’ve not done our job.

It’s our job to appreciate and recognize the sheen and glamour of well-produced piece of content, the sharply written piece of copy or a well-told story brought to life with a compelling activation. But, no matter how well-crafted this output is, it’s essentially worthless unless something happens as a result.

The work we do does not live in a vacuum, the brands we represent don’t (in the main) have legions of consumers desperate to hear from them, audiences aren’t desperate to have their most recent episode of CSI Miami interrupted by a commercial or message from our sponsor.

And, in many ways, that’s what sets the ICCO awards apart from the others – it’s got nothing to do with the input, little to do with the output, and absolutely everything to do with the outcome. While these awards recognize the proliferation of media channels, the shifting consumer landscape and the rise of data, they’re all primarily viewed as context and background color – a filter or litmus test through which we identify work that cuts through.

It’s a show that awards change.

Because change is the business we’re really in. We’re here to change a brand’s reputation, to change perception, to change the number of people queueing outside the store or picking up a particular product.

And change is something everybody can get behind.

“Change” is how we persuade junior staff to view awards as the pinnacle of career success – a sign they’re working at an amazing agency, alongside smart ambitious people with a determination to change the lives, reputations and fortunes of their clients.

“Change” is how we tell creatives their idea was more than just an idea – that they did something tangible that transformed the client’s business. After all, it’s easy to create, but hard to create change.

“Change” is how we measure the true impact of our work. Impact that’s more than the number of clippings or impressions we generated, or the number of likes our piece of content got, but what the people that saw those clippings and content did afterwards.

“Change” is how we communicate to both account leads and clients that the awards they’re seeking signify the work they’re doing and buying has purpose, meaning, value – that they’re drivers of business as much as drivers of reputation.

That’s why the ICCO Awards are important – because they show the power of our industry to effect change. And if you’re still unsure about the importance of these awards, or the impact of the work we do, I’ll leave you with the words of Margaret Mead; “Never doubt that a small group of thoughtful, committed, citizens can change the world. Indeed, it is the only thing that ever has.”