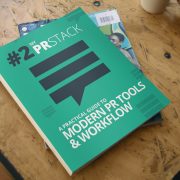 #PRstack is the largest crowd-sourced education effort in the history of PR practice. 48 free guides are now available to help public relations professionals get better at digital PR.

The complete book is availabe for free as an e-book on prstack.co. You can also print it via Blurb.

During October, each day another article will get releases and featured on the prstack.co website.

The ebook is distributed free under a Creative Commons license via the #PRstack community.

I’ve always been mildly envious of the cooperative spirit that exists in coding and SEO. Open source communities tackle issues that the industries are facing and aid learning and development.

They’re typically focussed on a single goal and operate outside existing industry structures. This enables them to move quickly.

It turns out that the public relations industry can also put aside competitive issues and open source. It’s how PRstack was created.

“This is an invaluable resource for anyone who works in PR in 2015 and beyond.”

For almost ten years we’ve been talking about how technology and digital communications have radically altered the practise of public relations. Much of the discussion has been theoretical and yet one of the biggest changes is in the myriad of applications and tools that we now use every day.

From those we use to engage with on-line influencers to how we submit receipts for expense claims technology is the heart of our workflow and systems and processes bare new and change quickly. Before PRStack no-one had thought to bring these multiple technologies together for the benefit of PR practitioners.

“Immediately upon publication, PRstack will become a definitive guide to practical public relations.”

As a professional practice, public relations has been plagued by too many publications that mystify rather than explain practice.

This project, led by Stephen Waddington, one of the world’s leading public relations exponents, is an antidote to that shortfall.

This project is more than 2 books. It’s also a website cataloging over 250 PR tools. It’s the biggest collection of PR tools on the planet. The project started with this crowd-sourced list of PR tools. A community gathered around the idea of making sense of the PR tools market and shared their favourite tools.

Our team at Prezly built the website in june 2015. One month later it boasted over 250 tools.

#PRstack needed to get built. So we did.

This is the work that keeps my team up. The designers and developers at Prezly hack the PR workflow each and every day. We’re obsessed with helping PR’s get better work done.
Initiatives like this help us build better tools together.

Contributors to the second #PRstack book

PR As A Force For Global Competitiveness? #agencypublisher

Giuliano Pisapia, The Mayor of Milan will open the ICCO Summit
Scroll to top