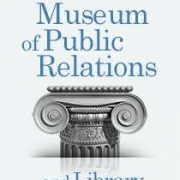 ICCO President Maxim Behar has been appointed to the Advisory Board of the Museum of public relations, announced yesterday in New York.

The Museum of Public Relations is a not for profit organisation and is the only public relations Museum in the world. It is based in New York City at CUNY Baruch College in the Newman Library Archives and Special Collections. The Advisory Board consists of top PR professionals with vast experience and significant achievement in the industry.

Shelley Spector, founder of the Museum said: “We are so proud to have such an internationally acclaimed public relations leader join our Board of Advisers. Mr. Behar will be able to provide much needed guidance, not only expanding the museum’s global presence, but how we can best serve and represent the growing number of PR communities around the world. Working with Mr. Behar and ICCO, we trust that the museum can begin its international outreach very soon!”

Maxim Behar said: “I really look forward to working hard to make our business, public relations, more popular and also more accessible to students and future generations. The history is an important part of our future and although business is changing very fast, there are many thing which we can learn from the past. I think collecting the best practice from all over the world, especially from the large professional networks, and distributing them in the smaller or emerging markets might be a significant task for the Museum.”

About PR Museum:
Founded in 1997, PR Museum is considered the world’s largest collection of materials documenting PR history. Among the organization’s possessions are more than 600 significant books, including many signed first editions, along with myriad artifacts, correspondence and photographs of historically significant industry people and events. Displays and exhibits include examples of old media technologies, a digital archive of videotaped interviews with influential leaders such as Daniel Edelman, Harold Burson and David Finn, and other artifacts that chronicle the evolution of the field of public relations.
The inspiration for the Museum is another great historical figure—industry pioneer Edward Bernays, widely recognized as the “father of public relations.” In 1919, Bernays opened one of the first offices as Public Relations Counselor in New York, and later taught the first PR course at New York University in 1923, and publishing the first groundbreaking book on PR, Crystallizing Public Relations, that same year. Visitors have access to dozens of books—many of them from Bernays’ own library—covering such subjects as psychology, social psychology, news media and political history. Authors include such well-regarded thinkers as Walter Lippman, Gustave LeBon, Everett Martin and Alfred Trotter.
www.prmuseum.org