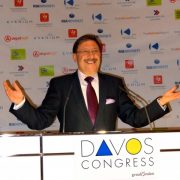 ICCO will contribute to the content of the World Communication Forum as an official partner!

Davos, Switzerland, February 5 – The forum’s 7th edition will be held on 8-9 March, at the Congress Centre in Davos, Switzerland. Communication professionals from all over the world will again get together to discuss the key trends in today’s global communications. ICCO will be among the official partners to fortify the key ideas of the WCF initiative as well as facilitate and spread the conclusions of the summit.

Maxim Behar, ICCO President, WCFDavos co-Chair and Board Chairman and CEO of M3 Communications Group in Bulgaria:
“For us it is important to be present at such an important event. I have been following very carefully the Davos Forum from its very first edition held 7 years ago, and I am delighted to see such a significant progress. As the largest Global PR community, ICCO will contribute with presentations, moderation of panels, and we shall also advise our members to join as participants.”

“We appreciate ICCO as the most influential professional association within the industry on an international scale and see great prospects for partnerships that will allow the best PR agencies worldwide to expand their business and professional expertise via the platforms of the Forum and its regional editions, thus fostering new, fruitful relations with media representatives, corporate directors, state administrations, and non-profit organizations around the world!”

The agenda offers a diversified content and insight by global experts with out-of-the-box vision for the future of the industry: how to add meaning, integrate interests and reach a growing influence in multinational/cross-cultural businesses and brands, how to engage the globe, how to manage crisis periods on the social media, and much more.

WCFDavos will again give the floor for a discussion on more or less controversial topics:

Traditionally, WCFDavos holds the Communications for Future (C4F) Davos Award. However, this time it offers up to 23 categories for recognition of remarkable creativity and unique vision of the future of communications, in two major groups of awards: Personal (individual communicators with a strong influence on global communications) and Corporate (companies setting the standards for effectiveness & professionalism).

WCF is an annual global event held at the Davos Congress Centre in Switzerland. Initiated by an International Coordinating Committee in 2010, it has united a great number of acknowledged professionals from 55 countries worldwide. Since its third annual edition in Davos, WCF has started expanding its global professional community with regional sessions held in some of the largest cultural centers and business capitals across Europe and Asia. The two-day conference covers the latest trendy areas and issues and outlines future tendencies in the global communications industry.

AVE white paper: accepting a broke system is “surrender of the worst kind...