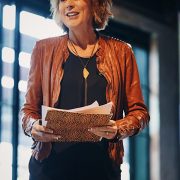 When is something truly creative?  The question kept coming up as our jury deliberated over 1,800-plus entries. As you might imagine, the debate was robust.

Just a few years ago, I was spending my evenings during the weeks leading up to Cannes reviewing PR Lions entries online.  I had the honor of serving on the 2014 PR Lions jury, and the creative question was top of mind for me even before I packed my bags.  Once I arrived in Cannes, I found my fellow jury members – 21 professionals from 19 countries — were asking themselves the same thing. The topic found its way into our dinner conversation and daily jury sessions throughout the week.

No one in the normal course of work and life stops to ask themselves: “Is this idea a creative one?”  Rather, it’s a natural reaction you have to something that simply grabs you.  You know it when you see it, as the saying goes.

During my time on the jury, I began to think more intentionally about how I defined creativity. I wanted to have a distinct point of view to help me judge campaigns of all shapes and sizes. Here is where I landed:

Based on what won that year – Chipotle Scarecrow — and in the years since, creativity is alive and well in the public relations industry.  We have a gift for infusing creative thinking into whatever we do, whether it’s an impassioned approach to a cause or social issue, a new product roll-out, or a corporate campaign.

Some of the finest creative work is done in the trenches of PR agencies every day. We just need more of it to show up in Cannes.

Question: How do you define creativity?

Global Women in PR Launches in Romania
Scroll to top