Guest blog post by Arun Sudhaman, Editor in Chief of The Holmes Report

That might be the type of question designed to raise the hackles of the good PR folk travelling to the Cote D’Azur for this year’s Cannes Lions. Yet it is a question that needs asking, particularly when you consider the industry’s mixed record in the PR Lions category, which the Holmes Report has been covering from its launch in 2009.

In 2012, the continued debate over the industry’s creative prowess led us, along with NowGoCreate, to launch the Creativity in PR study, a major global survey of 600 PR people from more than 35 countries across the world. In particular, we asked the PR industry whether it agreed with the claim that PR agencies lack big ideas, a contention that has been heard at Cannes.

Last year’s survey found that respondents, in general, continue to agree with the claim that PR agencies lack big ideas. 60 percent believe the statement is a fair one, essentially the same proportion as 2012. Among clients, the view is even more pronounced, with 69% believing that the PR industry lacks big ideas.

“The PR industry has a range of obstacles in putting forward and driving ‘big ideas’ and very few agencies have managed to master the art of both creating a ‘big idea’ and harnessing the power of their own structured traditional PR techniques,” read one survey response from an agency executive in Australia.

Significantly, the client-agency divide found here extends to perceptions of the industry’s creative quality. Broadly speaking, opinions of creative quality within the PR industry have not shifted much over the past 12 months, demonstrating that ambivalence persists. Once again, more than half describe it as ‘ordinary’ or worse. 38% say it is good and just 7% label it ‘inspirational’. One in 10 describe it as ‘unsatisfactory’.

Significantly, clients have a considerably more jaundiced view of creative quality than their agency brethren. Just 39% describe it as inspirational or good, while more than 60 percent see it as ordinary or worse. Once again, it appears that agencies are falling down in their quest to prove to clients that they have the necessary creative credentials for today’s engagement environment.Respondents in AngloSaxon markets — Australia (56%), the UK (54%) and US (50%) — held the most favourable view of creative quality, with Asia (38%) some distance behind.

Further clarity is provided when respondents are asked whether they think the quality of creativity in PR campaigns has improved over the past year. 61% disagree that it has, suggesting that there are no quick-fix solutions to raising creative standards.

Again, clients are even less convinced that quality is improving; just 26% agree with that statement. Latin American respondents (71%) are least likely to see an increase in creative quality, followed by US (69%) and UK (66%). Australia stands out, with just 59% disagreeing with the notion that the quality of creativity in PR has improved over the past year.

Those results provide plenty of food for thought. If nothing else, the hope is that this year’s Festival will definitively showcase the PR industry’s impressive creative credentials. 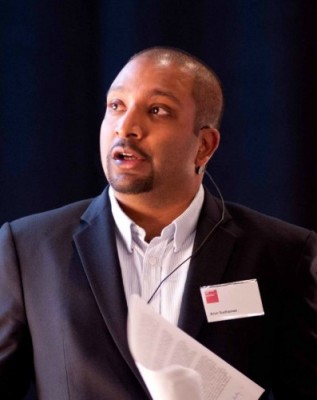 Arun Sudhaman is partner and managing editor of the Holmes Report, the global PR industry’s most authoritative and credible source of information and analysis

In this role Arun oversees the Holmes Report’s global content offering, including its analysis and insight into public relations and communications trends and issues. Since joining the Holmes Report in 2010, Arun has led a comprehensive relaunch of the title’s content platform, including its digital presence and new products such as the Influence 100, Global Rankings and Creative Index.

He brings to the position more than a decade’s experience as a journalist and digital content specialist, most of which has been spent covering the global PR, marketing and communications industries .