For many years the idea of feminism and equality have been largely synonymous. Indeed Wikipedia defines a feminist as someone one who “advocates or supports the rights and equality of women”.

​In an excellent recent article, Spectator Editor Fraser Nelson  suggested that this concept is coming apart.  He opined that with the success of young women at all levels of education and in the workplace, we may be seeing a long term trend where the ‘British economy will become feminised and utterly transformed’. As well as outperforming boys in at school, girls are now the majority of University graduates and women in the 22-30 age- bracket are paid more than their male equivalents.

It is reasonable to assume that  these young women might wish to settle down and have children with men their intellectual and social equals, but if this trajectory continues there will not be enough suitable men to go round. Successful women will be faced with the choice of either not having children or “trading down” to find a father for their children. This raises the interesting prospect of the equality debate going the other way.

Throughout my 25 years in the PR industry, women have always greatly outnumbered men in all levels below the Boardroom where the relationship is almost completely inverted.

The industry is typically almost entirely a graduate profession and remains a very popular choice with high performing graduates. When I ran H&K we had hundreds of highly qualified applicants for our graduate entry scheme often with two or more degrees, several languages and various exotic hobbies to hire from. And all that for 18 grand a year. So our industry should be a leading indicator of the trend Nelson is identifying.

Rather depressingly, over my quarter century the paltry amount of senior women seems to have barely shifted. We have hardly been standard bearers for the equality agenda – let alone a feminist one. Maybe these women could afford not to return to work after having children. Or perhaps their husbands were not prepared to face the perceived stigma of being the primary child carer. My experience (primary bread winner, flexible supportive husband) was rare ten years ago when we decided to role reverse.  It felt like a difficult choice for us both. Now society seems much less judgemental, and I am happy to see far more couples making this choice. 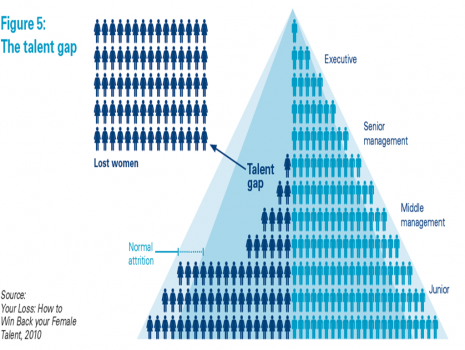 But logically, despite the carnage of the child bearing years which typically see a worrying chunk of talented women leave the industry, the preponderance of bright motivated women who either have no children or who are the primary bread winner should lead to at least equality in the boardroom. It will be interesting to see whether if  in the next 10-15 years women reach the top of the industry to the degree that their number and talents deserve.

And on their own terms, not solely by making typically ‘male’ choices.  If so, we will not really have moved at all on the feminist agenda, although the equality debate may be deemed to be over.