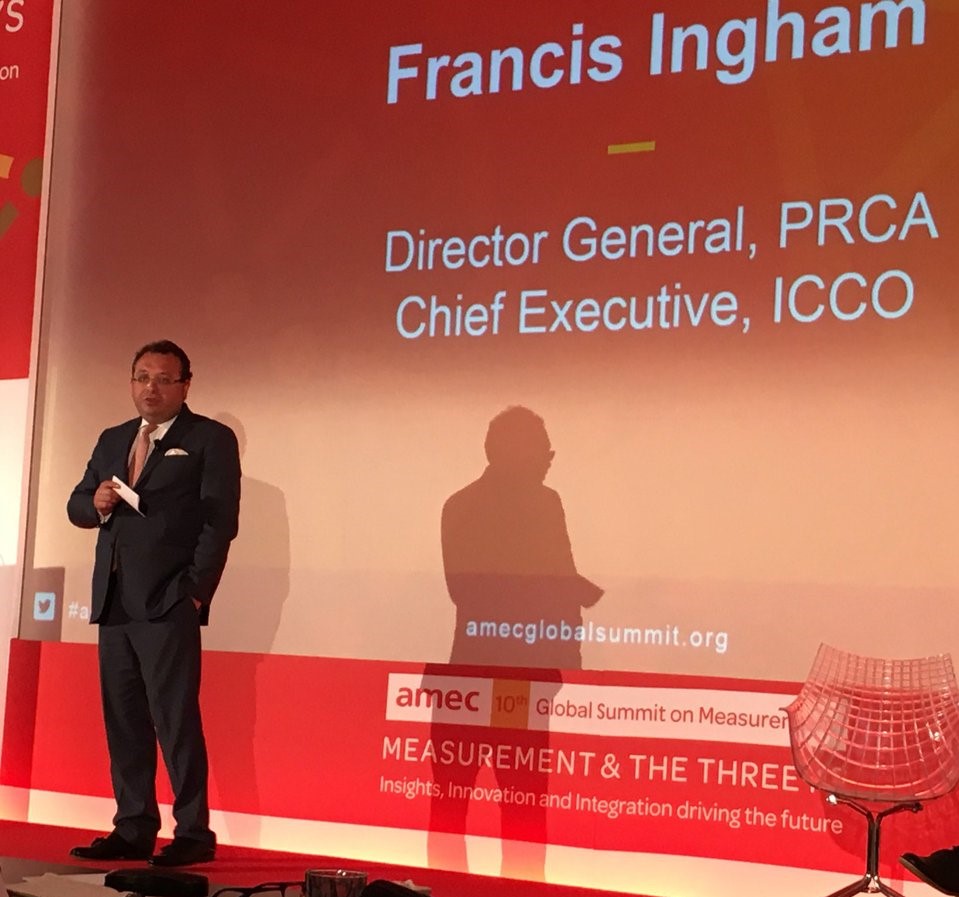 ICCO Chief Executive and PRCA Director-General Francis Ingham gives his thoughts following his time in Barcelona at the AMEC Summit. A tribute to industry stalwart Barry Leggetter and how far PR measurement has come in recent years as well as a sharp reminder that there is no room for complacency. Whilst AVEs are almost extinct in the UK and US, they are alive and kicking in some other markets, and there is a role for both associations and global holding groups to confront these challenges…

“This year’s AMEC Measurement Summit was my sixth. In a row. And quite frankly, I wish I’d been to more. Barry Leggetter invited me to the first one, in Berlin. To my regret, I said yes and then weaselled out – in those days, I didn’t travel.

“What can I report on it? I think that everyone present will remember it as the final Summit organised by Barry. And those words seem strange. Barry has been -IS- AMEC. He raised it from virtually nothing into the body that represents a new profession. And he did it basically through his own sheer determination, will-power, and hard work.

“We began at the PRCA and AMEC within weeks of one-another. And two men who hardly knew their opposite number became friends pretty much immediately. Sharing the joys and the occasional (?) frustration that goes with running a membership body….

“Barry, for your eleven years of brilliant AMEC service, I salute you. If I could make you a PRCA Fellow, or induct you into the ICCO Hall of Fame, I would do. But I’ve done that already! That’s my main message – Barry you have been awesome. You will be missed.

“What’s the secondary message from AMEC’s Barcelona Summit? I’d say it’s this. AMEC and the industry it represents, and the PR and communications industry that the PRCA and ICCO represent, need to stand on Barry’s giant shoulders, and continue his work, in order to make sophisticated evaluation truly global.

“AVEs are almost extinguished in the UK and North America – the latest PRCA Census told us that a mere 12% of practitioners used them in the preceding twelve months.

“But in many other parts of the world, they are alive and kicking. In the Middle East for example, 83% of practitioners use them according to ICCO data.

“Equally, while half of UK practitioners are aware of the Barcelona Principles, that number is much lower in other regions of the world.

“So here’s my challenge. We need to keep taking this issue seriously. In particular, we need to convince the big holding groups to take a lead – their companies in every region of the world should be adopting sophisticated evaluation techniques – not just, as sometimes is the case, their companies in the most well established markets.

“We also need to continue the 11 year-long collaboration between ICCO, PRCA, and AMEC. And then together we can achieve our common goal. The goal that Barry has pursued with such typically unflagging vigour for over a decade.”