Public relations as an industry in India, is sitting in a place it has never been – a place of significant recognition and power. While the power of PR has not always been captured by measurement tools given the intangible nature of reputation and crisis management, it is apparent that our discipline has an important place to play in this ever-changing country.

The mammoth elections this year is a clear indication of what PR, in its most defined form of stakeholder identification, messaging, story-telling and analytics, can do. We all know by now that the BJP captured the imagination of Indians through these means. They used listening tools (both conventional and modern), focused on messages and told stories that resonated with the aspirations and moods of the people. The fact that the Prime Ministerial candidate and now Prime Minister, Narendra Modi, picked different narratives for each audience keeping ‘hope’ as the core message, was testimony to how great PR can be.

The basics of PR suggest that one needs to have a ‘product’ to ‘sell’ even if it is an idea or a dream. And this ‘product’ must be seen to fill in for what is missing or should create a ‘need’ that people did not recognize until then. The BJP grasped this well whereas the Congress failed to realize that and attempted to sell something that had lost its shelf life and was ‘not needed’. The transition and switch in mood took shape primarily as the BJP campaign reached a high pitch and later when the results came out, creating what is now being seen as  a ‘newness’. There is optimism and a movement of change in the nation and these changes, even if not overt, are worth taking note of.

The current government – particularly Prime Minister Narendra Modi and his office (PMO) – have taken steps that are seen as modern, youthful and progressive. The PM and his immediate team often communicate through twitter. This is unique in itself for an India that has usually seen political leaders engaging through traditional media, rallies and visits to constituencies closer to elections. Additionally, the PMO has also laid down guidelines for its ministers on communicating with the media. This would sound familiar to people in PR who know the importance of communication guidelines that are aimed at creating one voice and clarity over desonance and confusion. These steps are being complimented with a new department called ‘digital diplomacy’, adding to the idea of progression, connecting with a sense of hope!

At the same time, much in contrast with the above and the belief that English is the language of progression and success, public discourse has seen the rise of nationalism and a slowly depreciating value of the language and its influence over domestic or external affairs. The Home Minister, Rajnath Singh’s address at a United Nation’s event in Hindi did not face the kind of ire that the English media would normally have shown. Even the digital world was silent on it. The PM’s address at the BRIC conference, seemingly a struggle for him as he spoke in English, found support in the English digital world with several commentators suggesting he should have spoken in Hindi, a language that gives him comfort. Many felt that the message would have been clearer had he spoken in Hindi. It would also have re-affirmed India, some pointed out.

Adding to this trend, prime time TV spent hours discussing the relevance of the dhoti (a traditional Indian outfit) as against formal Western outfits. Most panelists, including the elite class supported the dhoti claiming the suit and its association with exclusive clubs was a British hangover. Additionally, history books are reportedly being re-written aimed to bring elements that were never there with only a small number questioning the relevance of doing so. “It is the new India and a new definition,” a sociologist pointed out.

To the world outside this country, the high pitched elections followed by the swearing in, got many to re-look if not reconsider the prospects that India has had. What was to be a simple swearing in turned into a global one with the decision to invite SAARC leaders for the swearing in. With even the foreign press acknowledging the ‘turn of events’ creating yet another layers for this new found nationalism.

All that made news some months ago, no longer seemed relevant for debate. Hardly any section of the press discusses reforms and the level of foreign direct investment or even price rise even though the cost of food has gone up, in the manner they did prior to the elections. One would wonder why these ‘issues’ don’t matter at this point. It is believed that nationalism and re-affirmation of what India is and who Indians are has become critical to the people of the country. And when it finds an alliance in ‘hope’, issues that may have been significant, are no longer addressed the same way. This is probably why public debates are not what they were. Consider some of the questions being asked leading to discussions. What is our history? What is the most supreme language? Is English significant enough? What is appropriate attire? How should State governments function? Who is the opposition political party and is there one? Who are our friends and foes in terms of foreign nations? Is foreign capital more significant than Indian capitalists? The questions are aplenty and once the answers emerge, we are bound to see a new direction that most likely would not be the path the country took earlier unless a derailment occurs (very few believe there would be of any importance).

A closer look would tell you that some things have already changed. The obvious is the new set of cabinet ministers who have already started doing away with the Congress-style of functioning. The PMO has a greater stature than the previous regime. This government also wishes to redefine its engagement with State governments suggesting that it would support ‘reforms’ in each State if they chose to employ such an approach to governance. This, in effect, underlines the leadership of the centre over the states and the nation which fills up a vacuum that most Indians believed we lived with for several years.

At another level, the bureaucracy is not what it was. Social media and the digital world is important to this government and that they monitor the space, is a recognition of this fact. It also means, they listen and assess what is being said – a new way to connect with its people. We have a traditional media that seems distant from the PM but follows him ever so closely. Importantly, the media seems far more patient than it ever was with any government in recent times, yet again probably relying on ‘hope’. If we tie all of these factors in, one may clearly see a future where the paradigm of engagement, conversations and information flow going through a different set of controls.

We may ask ourselves why are these factors important to us as PR consultants. In a capsule, we worked in a manner that was probably relevant with a period in time. Today, the debates have and may continue to change. The dominance of languages and the emphasis also appear to be going through a churn of sorts. What is Indian culture could be redefined. The dynamics of markets could see a shift. The power equations as well are changing. Equations for networking have already changed. Media has. External affairs have.

The question here though, I would think, is whether we are in the loop? And more importantly, are we prepared to deal with this change which can alter the geographies we work in or the languages that we speak or even the debates that we would have to be involved in. Hopefully yes!” 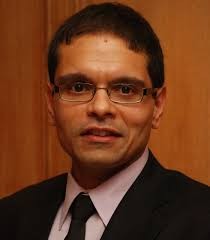 With an experience that goes beyond 20 years in the extensive fields of journalism, public relations and publishing, Sharif has amassed expertise in a variety of disciplines of the communication industry. Adjudged as the ‘PR Professional of the Year’ at the India PR & Corporate Communications Awards 2013, he currently serves as the President of PRCAI and is a board member of ICCO. He has previously spent two terms on the international board of PROI looking after the Asia Pacific region. In his varied yet related career, Sharif has worked with Penguin Books India, The Economic Times and The Pioneer. His interest in knowledge and content has kept his interest in writing alive.

Sharif has often commented on the industry, trends, best practices, the power of PR and the economy in general. His articles have been printed in publications and platforms such as  The Times of India, Hindustan Times, Business Standard, Mint Wall Street Journal, The Hindu Business Line, www.indiabiznews.com, www.exchange4media.com, Brunch, Pitch and earlier the think-tank journal –  Far Eastern Economic Review. He is also the editor of the widely appreciated and bestselling book ‘Realising Brand India’.

A strong believer that PR is central to marketing, image and reputation building, Sharif, has piloted a series of successful multi-constituency campaigns for clients putting his belief into practice. This approach has led Integral PR emerging as one of the best agencies in the country, ranked number two (independent) in India by the Holmes Report in 2012.