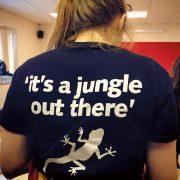 Public relations has a confidence issue and yet our value to organisations has never been clearer.

Comedy and satire are characteristics of a healthy democratic society. The same applies to an industry.

We have some way to go in public relations.

Satire in public relations is this article How kids ruin your PR career in PRMomentor Move over Edwina Monsoon:meet today’s six mighty beasts of PR in The Guardian.

Both columns are anonymous. Very few people have the nerve to call out our profession and when they do they often get it wrong.

Critical analysis, another lifeblood of a healthy society, is confused with personal criticism in the public relations business. It is holding back our development.

It is very different to satire and critical analysis in accountancy, HR, marketing, design, or mainstream business media.

It belies a much bigger issue. The simple fact is that public relations lacks confidence.

The public relations industry must cease being introspective and define its value to organisations as the reputational and relationship adviser.

It must confidently assert its contribution to the broader economy if it is to consolidate the place that it is securing as a management discipline.

Markets are conversations. They are created and nurtured through dialogue. The Cluetrain Manifesto taught us this in 1999.

Modern organisations recognise the opportunity that new forms of media provide to engage directly with publics. And they recognise the potential reputational hit if they don’t.

The public relations industry has the opportunity to take the lead role in the communication between an organisation and its audiences.

Dynamic and forward thinking communication teams, and agencies, such as my own are firmly grasping the opportunity.

Public relations practitioners need to be braver and modernise more swiftly if they want to grasp this opportunity.

My fear is that the public relations isn’t moving fast enough and is unassuming and self-effacing. These are admirable characteristics in a human being but not in a boardroom.

I don’t use that term lightly; it is a war. The battles are taking place in pitches and the reorganisation of communication and marketing departments day-in day-out.

The battle lines are being drawn by media change and audience consumption and the positions that advertising, public relations and digital professionals assume.

In many instances the lines between the disciplines are blurring to the extent that it not possible to tell one from the other.

If a County Council posts an editorial news update in its Facebook newsfeed and then pays to promote it to ensure that all its follower see the message, is that advertising?

If a retail brand works with a network analysis tool to identify the key influencers in its niche and then pays the company to manage an influencer campaign on its behalf, is that public relations?

If a mobile phone company alerts customers and prospects to a new service offer via email and a paid campaign via Facebook advertising is that customer relationship marketing, direct marketing or public relations?

One thing is for sure. The customer doesn’t care and the C-suite is following her lead.

The threat to public relations taking the lead or even having a role in either the reputational or marketing mix is its previous failure to adapt to new forms of media as quickly as other disciplines.

We’ve been here before.

In 1998 a company called Google launched with the purpose of enabling Internet users to find the most relevant content online.

Its vision of organising the world’s information and making it universally accessibly and useful has remained consistent for more than 17 years.

The rest as they say is history.

It’s called search engine optimisation and is a growing segment of the burgeoning digital industry. Public relation has the opportunity to take back some of this market as Google tweaks its algorithms.

The marketing industry isn’t waiting for permission to become the adviser to brands as its experts seek to start and engage in conversations with their audiences.

Advertisers have been quick to recognise how their discipline’s strengths in planning, creativity and production can be used in the new media environment.

The public relations industry for its part has the most potent proposition for organisations.

Public relations has always worked in the editorial environment, listening and crafting a narrative to enable organisations to build their reputation by earning attention and integrating paid wherever appropriate.

The industry needs to be brave enough to align its business model from the hierarchical structures of old to the new challenges that organisations face.

An army of agencies and communication teams are adopting agile techniques and adding new skills.

They are rooting campaigns in objectives aligned to the organisation. They are using data and analytics to plan and evaluate, in real time.

They aren’t scared of integrating earned, paid and social media.

They are addressing professionalism through qualifications, standards and continuous professional development.

They are working collectively to tackle the issues that our business such as gender equality, diversity and workflow.

We must drive home our value through action. We also need to get a genuine sense of humour.

These characteristics will be a sure sign of a confident profession and one that is fit for the future.

This post was originally published on Stephen’s personal blog.

Stephen is Chief Engagement Officer, Ketchum and Visiting Professor in Practice at the University of Newcastle. He’s Past President, CIPR and the author of #BrandVandals, Brand Anarchy, Chartered Public Relations, Share This and Share This Too.